Tomorrow is a great day for humanity. No longer must we resign ourselves to watching pirated versions of old episodes of The Simpsons online. No longer do we need to mourn the lost 4th season box set that somehow didn’t make it to California (ahem ahem). For tomorrow, we dine in Simpsons World! That’s a weird 300 reference, in case you didn’t catch it. FX and Fox are releasing a website where you can watch every Simpsons episode ever, as well as all sorts of other content. And I think it’s available to anyone with a subscription to that channel, though I’m very unclear on that at the moment (I’ll have to find out tomorrow!)

As with the Safina, the drink in my head did not quite match the drink I could create in reality. Doh! I could not find blue cotton candy to put on top, to make Marge’s hair, so I had to settle with naming it Homer. Naked. Still, it’s got donuts and beer, and what else do you need in a Simpsons drink? Obviously, the yellowness is for the Simpsons’ skin. Hence the nudity. It’s pretty simple, just a basic shandy, but I’ll take it. Enjoy!

(N.B.: The Flaming Moe has already existed for a while in real life, in various forms, so I chose to avoid it for that reason. Also it sounds horrible.) 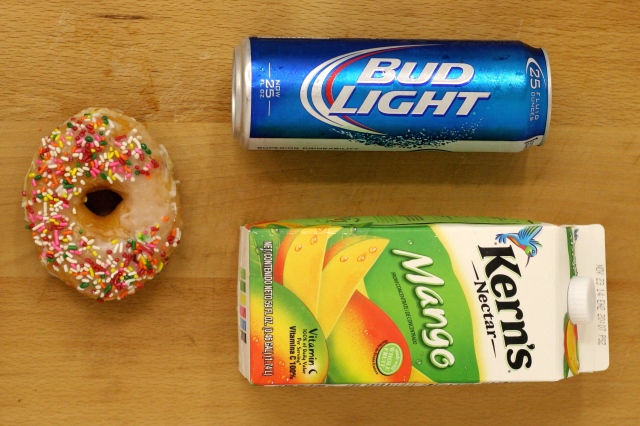 Mix the liquids together in a glass. Top with a donut, the best garnish ever. I cut a circle into the bottom of the donut so it would fit onto the top of the glass. In retrospect, this was a horrible idea – it fit so perfectly that the bottom went into the drink and got really gross. Just keep it as a side, maybe.

BN: I like this! Simple, but good. Would probably be even better if, you know, the beer was actually a good beer. Still a lighter one, certainly, not a stout or anything, but something with a little more flavor. Also, you should stir it every now and then because it’s starting to separate, as I write.

PiC: I like it – it’s a good twist on a shandy and you can actually taste the beer which I didn’t think you’d be able to. It maybe could use a little bit of acidity, but it would be good with Indian food [N.B.: APU!] because it’s almost like a mango lassi.