Been a while since one of these, but the Boozy Newsie News Flashes are just quick reviews of drinks, places, events, anything that I’ve experienced recently. Here’s the latest!

I’ve had a lot of ciders, of varying types (hard, sparkling, regular, pasteurized, raw and probably dangerous…) and my favorite is still the fresh-from-the-press bottles you can get at Russell Orchards in Essex, Massachusetts. Not trying to be hipster and know about niche places — mainly it’s right near where I grew up.

Until a few weeks ago, though, I had never had cider made from anything but apples and a few pear versions. Until Reverend Nat came along with a pineapple one. Technically, it’s Padre Nat, just like Trader’s Joe’s Jose / Giotto / Ming / etc. variations for its foreign foods.

Called ¡Tepache!, exclamation points included, you’re instructed to mix 2:1 with a light beer (for best results). We tried both that concoction (¡Tepache!-Tecate is a mouthful) as well as drinking it neat, and it was definitely an interesting experience. 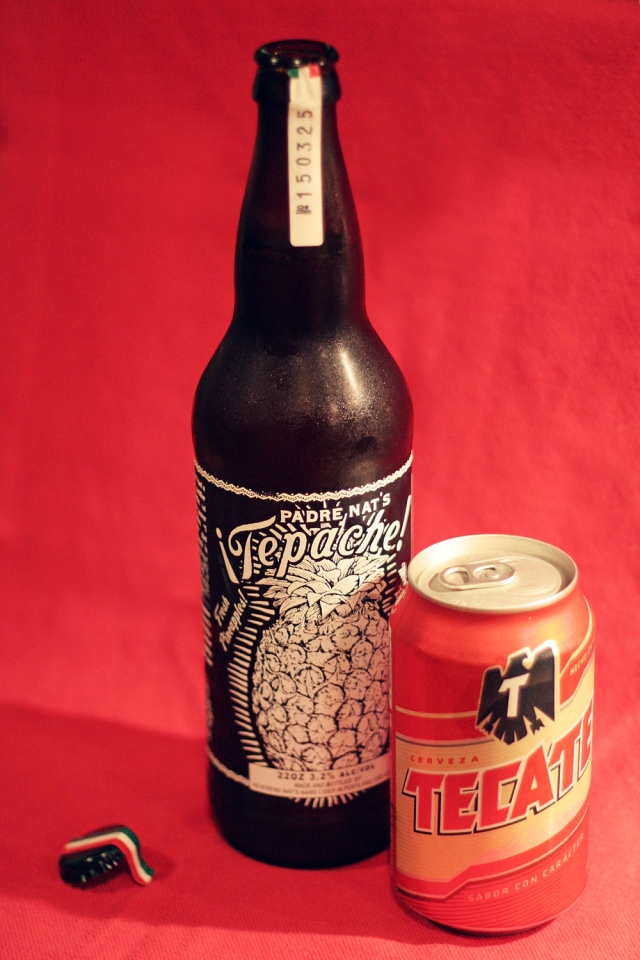 BN: The cider was very sweet and light orange in color, with only a hint of carbonation. It wasn’t as acidic as pineapple juice is, but still had a good flavor of the fruit. Honestly, it tasted a little more like juice than it did cider or beer. I suppose that’s why they want you to mix it. Putting it together with a can of Tecate we had laying around somewhere, it added the right body and bubbles to the drink, without overpowering the pineapple flavor. It tasted like an unusual shandy, and I liked it, though I’m not sure I would have it again. It could be good for mixing in other combinations, but by itself it didn’t really have the right kind of oomph that I would be looking for in such a drink.

PiC: I definitely liked it better with the Tecate, but it was a little too sweet without it. It should taste more alcoholic.

On a rainy day back in April, I visited a new event held in the Silverlake neighborhood of Los Angeles, showcasing local bars, restaurants, and breweries, and what they had to offer in the line of food and drink. This had a pretty awesome lineup, and I both ate and drank too much… What better way to relive those memories than to tell you about it! 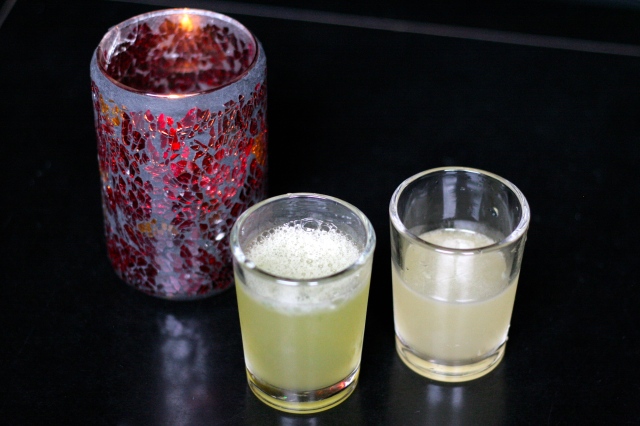 The host of the event, the 4100 Bar, had two house cocktails. On the left, the gin-based one, with TRU organic gin, cucumber, basil, lemon, and sugar. On the right (I got a little carried away drinking it before we took the picture), the scotch-based cocktail – scotch, agave, ginger, lemon, topped with Island single malt (I believe it was Oban but I don’t quite remember). Both of these were good, although the gin one pretty much just tasted like lemonade, which is not necessarily a bad thing.

Next, we braved the outside tents in the surprisingly powerful rainstorm. 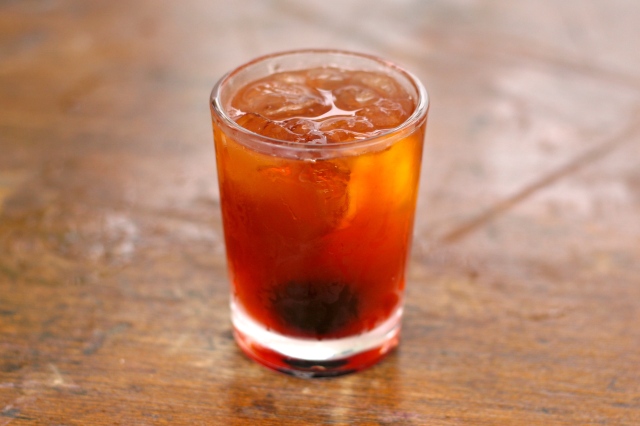 The Thirsty Crow offered up a classic Old Fashioned, nicely mixed and not too sweet, including a real Maraschino cherry and juice (not the bright red stuff) and a ton of bitters, just the way I like it. 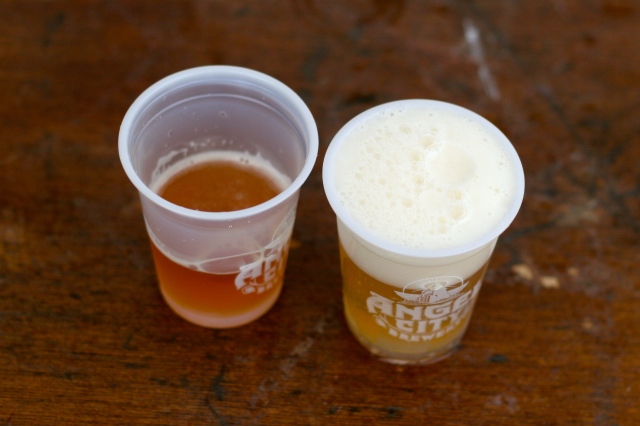 Next stop was Angel City Brewery, where we “sampled” (full glasses) their IPA and West Coast Wheat. Angel City tends to be a little hoppy for me — I know, I know, I should appreciate the bitterness, but I don’t — but I imagine if you like that sort of thing you’d be happy with these.

The Black Cat was churning out these nicely spicy cocktails — Ancho Reyes ancho chili flavored mescal, Lillet, grapefruit, lime, and a pinch of salt on top. Depending on the sip, the salt was a little strong but the flavors were great. 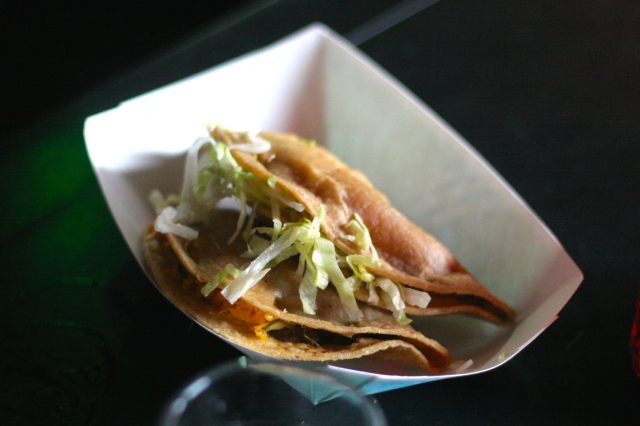 Malo had not only some delicious cocktails (we didn’t have three, I swear) but also amazing, seemingly deep-fried tacos and chips. The cocktails had Mexican Squirt soda, simple syrup, lime, grapefruit juice, tequila, and a pinch of chili salt, and were called “The Paloma.” Yay for names! I blacked out from how good the tacos were so I don’t remember what was in them, specifically. 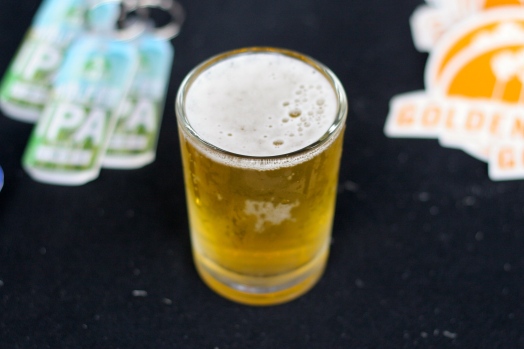 We also got far too much to drink from Golden Road, a brewery I love. The 329 was an easy-drinking, not too flavorful lager, and the IPA was, well, an IPA. Sorry I can’t be more specific about that, but so it goes.

Doubling up at this point, Akbar had a Moscow Mule (left) that included the surprising addition of Chinese bitters, which apparently just tastes like anise. I couldn’t decide if I liked it or not, which is usually the case with anise-flavored liqueurs. Mohawk Bend, my favorite restaurant of all time, had essentially a vodka lemonade with California poppy bitters. I was sad that you couldn’t taste the bitters very much, as it sounded like a cool touch. 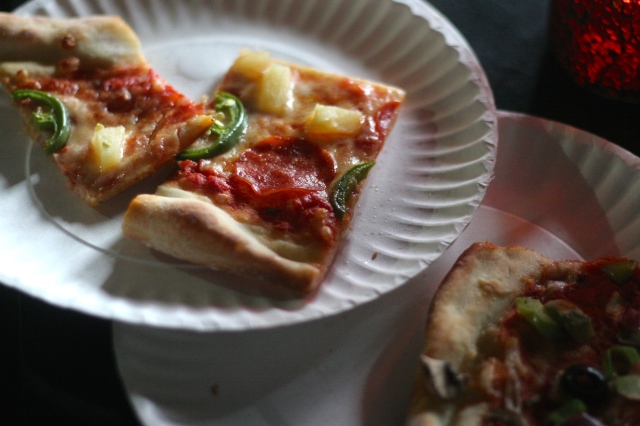 After all the alcohol, we needed a break — and Garage Pizza delivered. I know this is a drink blog, but this pizza was great, so you should go there. Perfect balance of grease and cheese.

The Virgil was giving out “The Caravan,” with rye, lemon, ginger, honey syrup, and angostura bitters on top. Nicely sweet and easy to drink.

A very similar-looking drink was made by Barbarella, with Makers 46, chipotle honey syrup, lemon syrup. Nicely spiced and the lemon cut the honey well.

Charcoal BBQ gave out some delicious pork ribs, pickled cauliflower and normal pickles. We went back later in the day and told the chef we really liked the pickles and he dumped out literally the entire container (at least a quart) onto a plate for us. This was slightly excessive, but we still ate it.

The last drink of the day came from El Condor, which gave out a perfectly normal but perfectly good margarita. Sampled this with some good old Mexican coke (or cola, in this case).

And then for the sad part of story. Apparently there was a pizza-eating contest at this event but SOMEONE (who will remain nameless) did not inform me of this fact until it was too late and it had already begun. Now how will I claim my pizza eating crown? I suppose I wouldn’t be able to compete with at least the beard of the winner (last picture) so it’s okay. 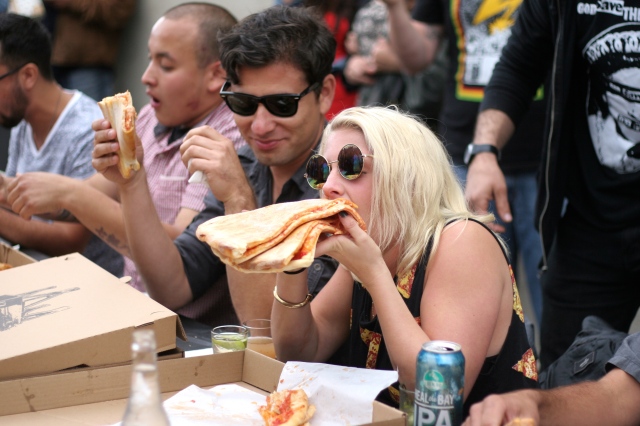 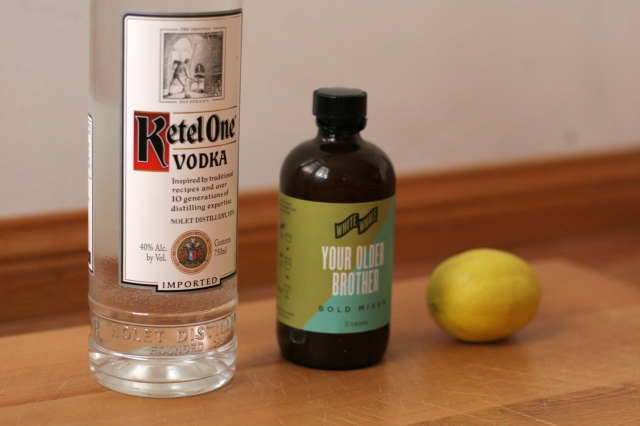