Come on, these are just getting ridiculous. Ice should not be an ingredient. Unless you blend it, in which case I give it a pass.

However, on the bright side, this one is easy to news. Because sports on ice are fun to watch at the Olympics. Unfortunately, it has not been going so well for Team USA’s figure skaters… I don’t usually watch that much skating but have a fair amount this year; it seems like people are falling a lot more than I would expect. Is this normal? OR IS IT A KOREAN PLOT?!?!?!? Let me know.

END_OF_DOCUMENT_TOKEN_TO_BE_REPLACED

The Supreme Court made a number of good decisions this week, but the one that seemed most apt for drinkifying was the Obergefell v. Hodges case, which is mostly known as the case that decided same-sex marriage was a right in the entire United States.

In honor of this decision, generally (and by me) regarded as a triumph of love over adversity, prejudice, and all that bad stuff, I decided to put things I love into a cocktail and see if it was any good. Slightly less thought through than SCOTUS’ decision, but hey, it ended up working. 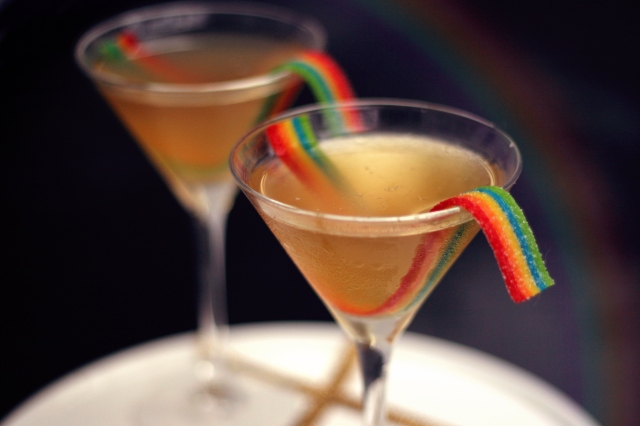 BN: I really liked this. Weirdly, I didn’t like the combination of the ingredients before adding the sour strip, and the sour strip itself was pretty cherry-medicinal which is never good. But together, they melded nicely (and you should probably wait a bit before drinking to allow them to do so). It had just the right amount of sweet and sour, and wasn’t too strong on any one flavor. Also, the alcohol-infused sour strip was delicious.

PiC: I really liked this! I mean, I love sour candy and I wanted this to be a good one given the awesomeness of the event that inspired it, but to be honest I thought it was gonna be super alcohol-tasting, which is not really my thing. But it actually was dangerously drinkable and went super well with the sour candy garnish, so yay! #LoveWins! 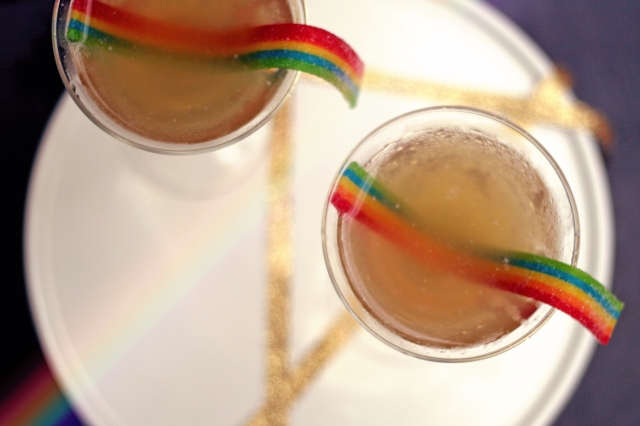 Tomorrow is a great day for humanity. No longer must we resign ourselves to watching pirated versions of old episodes of The Simpsons online. No longer do we need to mourn the lost 4th season box set that somehow didn’t make it to California (ahem ahem). For tomorrow, we dine in Simpsons World! That’s a weird 300 reference, in case you didn’t catch it. FX and Fox are releasing a website where you can watch every Simpsons episode ever, as well as all sorts of other content. And I think it’s available to anyone with a subscription to that channel, though I’m very unclear on that at the moment (I’ll have to find out tomorrow!)

As with the Safina, the drink in my head did not quite match the drink I could create in reality. Doh! I could not find blue cotton candy to put on top, to make Marge’s hair, so I had to settle with naming it Homer. Naked. Still, it’s got donuts and beer, and what else do you need in a Simpsons drink? Obviously, the yellowness is for the Simpsons’ skin. Hence the nudity. It’s pretty simple, just a basic shandy, but I’ll take it. Enjoy!

(N.B.: The Flaming Moe has already existed for a while in real life, in various forms, so I chose to avoid it for that reason. Also it sounds horrible.)

Mix the liquids together in a glass. Top with a donut, the best garnish ever. I cut a circle into the bottom of the donut so it would fit onto the top of the glass. In retrospect, this was a horrible idea – it fit so perfectly that the bottom went into the drink and got really gross. Just keep it as a side, maybe. 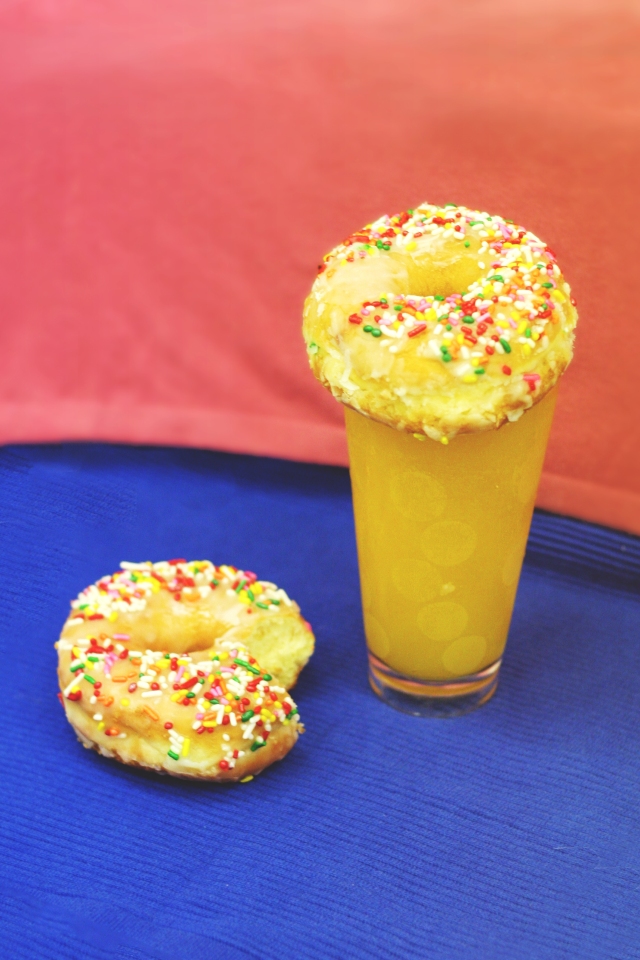 BN: I like this! Simple, but good. Would probably be even better if, you know, the beer was actually a good beer. Still a lighter one, certainly, not a stout or anything, but something with a little more flavor. Also, you should stir it every now and then because it’s starting to separate, as I write.

PiC: I like it – it’s a good twist on a shandy and you can actually taste the beer which I didn’t think you’d be able to. It maybe could use a little bit of acidity, but it would be good with Indian food [N.B.: APU!] because it’s almost like a mango lassi.

Apple’s new iPhone has had a few problems lately. From blocked cell phone service to erased user data, it hasn’t had the easiest of rollouts. But the picture above (from a video by Unbox Therapy) shows what, to my mind, is the weirdest flaw — they bend, and they’re not one of those fancy curved phones that are supposed to…

So, in honor of this problem (and the reason I’m glad I’m on the Xs series and not the main one), I give you The Bent Apple. It’s a little weird, something that would be typical (spiked cider) but changed in a way you wouldn’t expect. And, of course, it’s an apple. See what I did there?

Mix it all up in a Boston shaker, strain and pour into a fancy looking glass. Garnish with an apple slice. Pro tip: I cut a little notch into the apple so it would easily stay on the edge of the glass.

BN: I liked this. While it smelled intriguingly like cumin, its taste wasn’t as strong, but other tasters disagree so I could just be immune (cumin is my favorite so I use it in everything). It had enough weirdness to be unique and tasty, and all the base ingredients (particularly the cider) were great on their own but melded together well. We learn that whether or not your phone is flexible, a Bent Apple is not necessarily a bad thing.

PiC: I thought the drink was very tasty – I was prepared to really taste the alcohol and you really can’t with this one, it’s like cumin apple cider. That sounds weird, but it was actually good and not too sweet even with the syrup (though more ginger flavor might  have been nice). I bet it would be good hot!

I’m out of town this week, for my brother’s wedding! So, this is a quick update from the road.

19 years ago today, The Usual Suspects was released! Last year, the Partner in Crime and I watched this, for her first time, with a friend. For that event, I made a drink (two actually, but the first was bad), and I’ve updated it and hopefully made it better for this year. It’s a little bit Japanese, but maybe not. It’s that sense of mystery that keeps it going. Just like the character in the movie! Or something.

I was alone for this one, so apologies if the camera work isn’t as good. Also, I was the only one to taste it. Might it be horrible for anyone else but me? It certainly might. 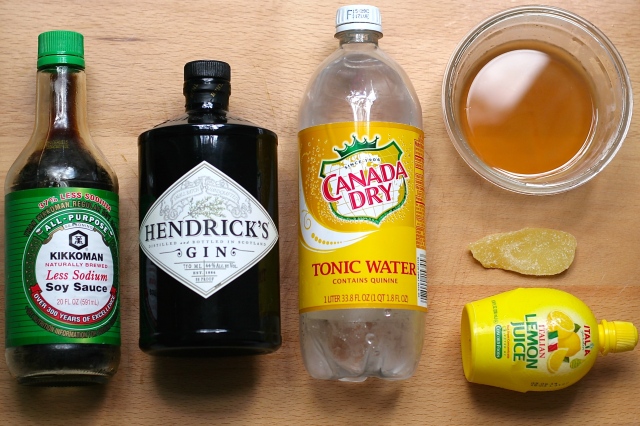 Put everything except the tonic water in a rocks glass with ice. Fill up the glass with tonic, and garnish with the crystallized ginger!

BN: This certainly had good flavors, but it was a little weird. However, I don’t really know if that was, say, the slightly flat tonic water (okay it was a little old, but I’m pretty sure it would be good with more fizz) or the fact that I don’t actually like gin… You’ll have to let me know what you guys think, because I’m not an impartial observer. Still, I think the flavors mesh well and it works overall.

PiC: I wasn’t here. I didn’t drink this. STOP ASKING ME QUESTIONS. 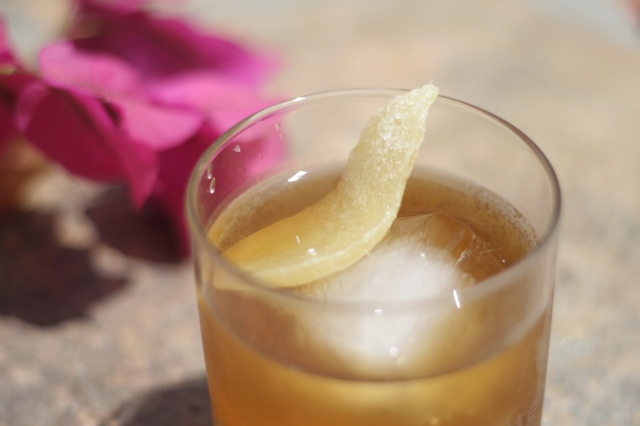