Time for the second in my series of breweries that have bears in their logo. This one makes slightly less sense than Big Bear Lake Brewing, but I’ll take it.

As some of you may know, I was actually living up in Mammoth for the past month. This made it a little tricky to create any drinks in my minuscule Airbnb kitchen, so that’s why you’ve been seeing all these reviews. I’ll get back to the cocktails soon, I promise. Anyway, the one thing I could do was taste all 15 beers available at the Mammoth Brewing Company. So I did. END_OF_DOCUMENT_TOKEN_TO_BE_REPLACED

I’m renaming this category! I’ve been traveling a lot lately, so there are more and more of these alcoholic postcards to write. Hence, “To Go,” which seems fitting, especially after our New Orleans experience of To Go booze.

Anyways, we were in Big Bear a few weekends ago, and of course we stopped in to their brewery — the Big Bear Lake Brewing Company — for a flight. It wasn’t a huge place, only 6 beers to try, but it was nice enough. They did have a very questionably “patio” that we chilled on with our friends; it was only about 1.5 people deep at maximum, but we could look out onto the oncoming rainstorm which was kind of fun. 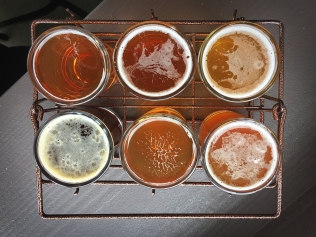 (I’ve put a photo of their own tasting notes at the end of this post, if you’re interested.)

Barely Legal Honey Blonde – ABV 6.5%
This actually tasted like a sort of nutty, roasty mead. We didn’t taste licorice, though the card we got with it said that we should. Very malty, not hoppy at all. Nice!

Half Wit Belgian Wit – ABV 6.0%
I did not like this at all. It smelled like bananas, and had a similar aftertaste, which really wasn’t great.

Black Raspberry Session Pale Ale – ABV 4.3%
It smelled like raspberry but tasted like nothing. Hoppy, gross nothingness. It also wasn’t very bubbly, but that may have been because the tender poured it out of a pitcher for some slightly unclear reason. Our least favorite.

Ode to Winslow Chocolate Porter – ABV 6.6%
This was fine. Chocolate and coffee flavors like a classic porter / stout type drink. As you would expect.

Watergate Session Pale Ale – ABV 4.2%
Way too hoppy. But not many other flavors — almost watery. I hated it, but you could at least tell that there wasn’t much alcohol in it so you could drink a lot of it. If you liked that sort of thing.

Whispering Pine Belgian IPA – ABV 7.0% / IBU: 68
Still hoppy, but at least has flavors, unlike the other ones. The hops keep going and going on the aftertaste, but at least there’s a pine flavor to go along with them to make it a little better.

Well, we didn’t really love these. The Honey Blonde was the best of the bunch, but who knows — if you like IPAs more than I do (I feel like most people do) maybe you’ll like the brewery. And it’s still a fun place to go, even if you don’t like the beer. 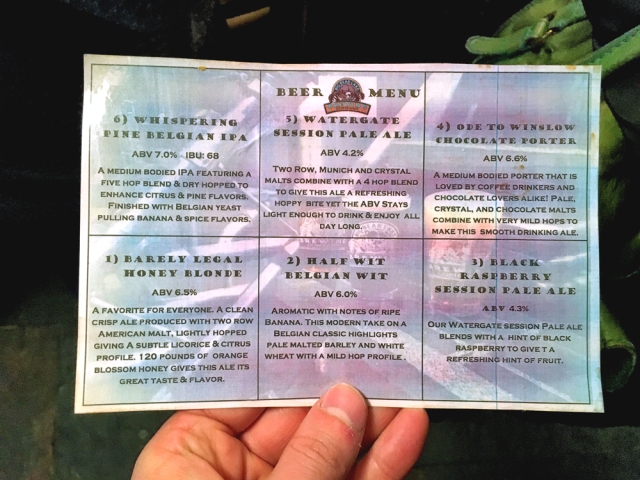