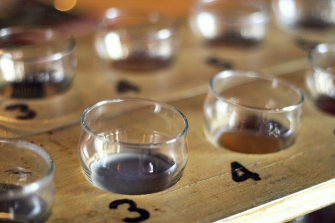 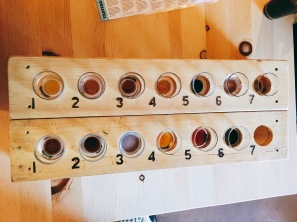 Time for the second in my series of breweries that have bears in their logo. This one makes slightly less sense than Big Bear Lake Brewing, but I’ll take it.

As some of you may know, I was actually living up in Mammoth for the past month. This made it a little tricky to create any drinks in my minuscule Airbnb kitchen, so that’s why you’ve been seeing all these reviews. I’ll get back to the cocktails soon, I promise. Anyway, the one thing I could do was taste all 15 beers available at the Mammoth Brewing Company. So I did. 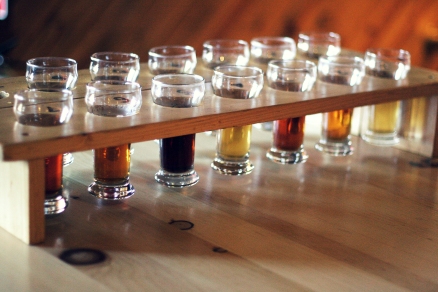 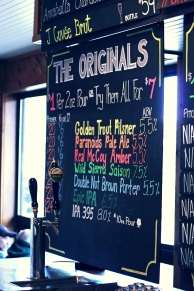 Golden Trout Pilsner – 5.5%
A very light-flavored beer, but very nice. You get a little bit of honey, as well as the sweetness that comes with it. Malty and only very lightly hopped. I thought I didn’t like pilsners, but this is the second one I’ve had recently that I like, so maybe I just didn’t know what pilsners taste like.

Paranoids Pale Ale – 5.5%
Apparently Paranoid Flats are a Mammoth thing. This was another APA, so I was looking forward to it, but I didn’t really like it. It smelled piney, which was nicely foresty, but it was too hoppy overall. They lingered longer than I anticipated, too, but the PiC didn’t have as much of that experience.

Real McCoy Amber – 5.5%
Dave McCoy is the founder of Mammoth Mountain, so this is named after him. This was nice and malty. It smelled a little like scotchmallows — caramel and toasted marshmallow together, and tasted similarly though of course less strong. It was surprisingly bubbly, too, more than I expected. That might be something to do with the altitude? I’m not sure how that works, but that was actually the most notable feature of it. It had a sort of charred steak-y aftertaste, barely, which was not a bad thing, despite my description of it.

Wild Sierra Saison – 7.5%
This was flavored specifically with pine needles (as a lot of them were), and you could smell it. The aroma was also citrusy and fruity, and surprisingly sweet. It didn’t actually taste like much, but had an odd textural element — it was kind of syrupy, thicker than most beers. I liked the smell a lot but the taste was only so-so.

Double Nut Brown Porter – 5.5%
This does not actually have nut flavors; add an imaginary hyphen in “Nut Brown.” It also apparently won a bunch of awards. It smelled super coffee-esque, and tasted similar, which was pretty good — almost a mocha. Texturewise, this felt pretty watery (but I always find that with porters… I just want a stout when I drink them). Obviously not bitter at all. Overall I could see why it won the awards, but I wouldn’t necessarily order it.

Epic IPA – 6.5%
This was the ideal color for beer, in my opinion; the perfect golden brown. However, it had a ton of hops in it, and as such I didn’t want to drink any of it. They kept going, and hit the back of your tongue real hard.

IPA 395 – 8.0%
This one also won an award in 2013. It has juniper and sage flavors, apparently picked actually on the 395 highway corridor. It smelled really nice, spicey almost, and I thought a little bit like challah, or Portuguese sweet bread, if you’ve had that. The juniper was mostly at the back of the palate, and there was a little sage flavor throughout. I ended up actually buying a couple of bottles of this to bring back — I liked it a large amount for an IPA. 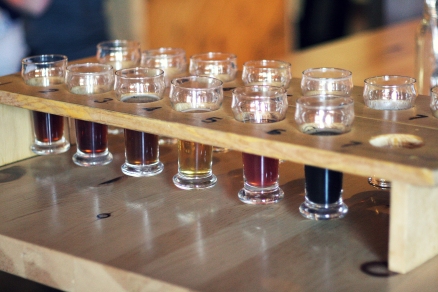 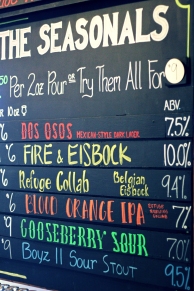 Dos Osos – Mexican-Style Dark Lager – 7.5%
I was assuming that a Mexican-Style dark lager was sort of like a Negro Modelo? The nose was strongly of coffee, chocolate, and cinnamon (mostly the first). The taste was pretty similar, but a little sweeter. Not my favorite — kind of watery as well

Fire & Eisbock – Eisbock – 10.0%
I only recently learned what an eisbock was, and now it keeps showing up. Basically, apparently, it’s a doppelbock that gets half frozen, and the remaining liquid part is the eisbock, so it’s super concentrated and sweet. This smelled like strawberries, and was definitely very sweet. Some maple notes in the actual beer, no real strawberry flavor. It was really nice; had the texture and similar taste to the bourbon barrel-aged stouts that I like all the time.

Refuge Collab – Belgian Eisbock – 9.4%
Another eisbock! This was cinnamon-y and even more syrupy than the last one. Delicious. It almost tasted like gingerbread.

Blood Orange IPA – 7.0%
This was pretty nice. Not super fruity, and not super hoppy — the flavors were definitely there, but not overpowering, which is great. I wouldn’t ever order this (I don’t love fruit beers or IPAs as you know) but I wouldn’t be sad if I got it. It had the perfect strength of flavor.

Gooseberry Sour – 7.0%
Very tart, though not as tart as some of the ones we’ve had in the past. Tasted sort of like cranberries? I’m not really sure what a gooseberry tastes like. Overall, this was almost like a kombucha, but, as always, I wished it was a little more bubbly — sours are often kind of just like juice, which is not what I want in a beer.

Boyz II Sour Stout – 9.5%
In theory, this was boysenberry flavored. It still smelled like coffee, and almost looked a little blue or purple (but that may have been my imagination). It tasted like you had melted a tiny grape jolly rancher into coffee, but not in a terrible way? It was definitely a stout (the first sour stout I’ve had) but still had the lack of bubbles issue.

There was a ton of variety at this brewery, and some of them were really good! I’d definitely check it out if you’re looking for something to do after a day on the slopes. They have food as well, but it was a little overpriced (though was pretty good). Stick to the beer, and then maybe go out somewhere else. Be warned, though, that alcohol does affect you more at altitude, so just keep that in mind as you imbibe.