At this point, the zombie apocalypse is probably inevitable. Whether through some weird variant of ebola, enterovirus 68, or something as yet unknown (bath salts?), we’re eventually going to have to fight against a horde of the living dead, either surviving for just one more day, or turning against our friends after we pass.

To me, that’s way too stressful. So, instead, let’s just watch other people do that on TV. This Sunday, the Walking Dead returns to AMC for its 5th season, and we’re all ready to watch. In honor of the show, I’ve made the Rick Grimes, which is just the thing wind you down from your post-apocalyptic murder haze. In keeping with the theme, I tried to use only things that you might be able to find after civilization has ended, with the possible exception of ice because, well, let’s just say it’s in winter and they cut it out of a lake. Or whatever.

For those of you who don’t know, the show is set mainly in Georgia, hence the peaches — the cornerstone of the drink. Anyways, without further ado:

Mix together the three liquid ingredients in a mason jar or other appropriately end-of-the-world-type glass. Add some ice (if you’re okay with breaking the illusion) and fill up the rest with the peaches from your scavenged canned goods. Enjoy! 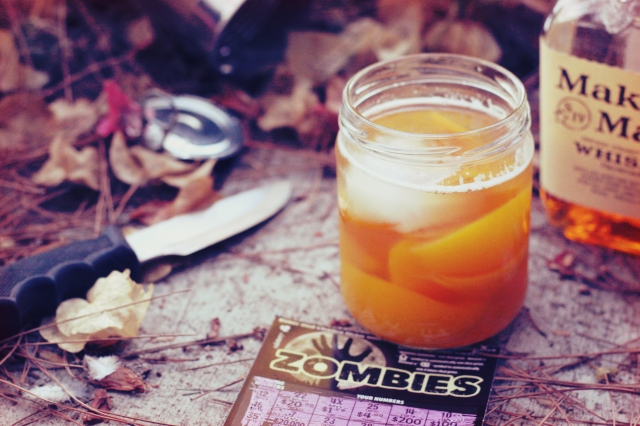 BN: I couldn’t decide which version of this I liked better — with more or less sparkling water. I think I lean towards the 3 oz version, because the flavors mix together a little better, with the bourbon being less overpowering. I was surprised as to how much of the syrup I had to put in to make it taste like peaches, so the solution of using the peaches itself worked out pretty well. Now that I think of it, though, it might be cool to drain out a bit of the syrup from the can, just pour the booze and the seltzer straight into it, and drink from that! Dang, I wish I had thought of that before. But still, pretty good drink, nicely fruity without being too much so. And definitely Southern.

PiC: I liked this better after you added more sparkling water, but I think it might actually be a better drink with less (I’m just not a huge whiskey girl). The sweetness was perfect, though, and it got more peachy as it went on which was nice.

2 thoughts on “The Rick Grimes – The Walking Dead Premiere”