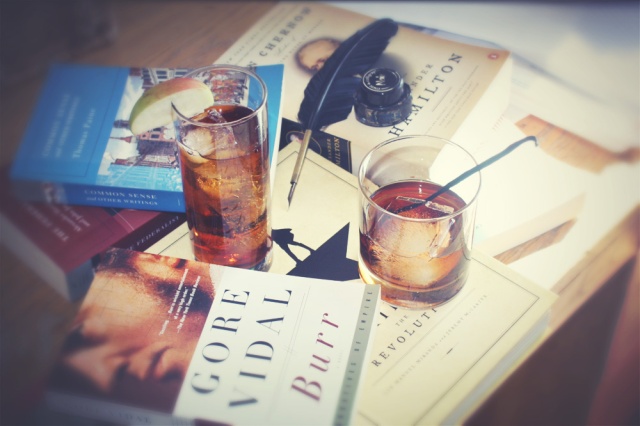 Occasionally, I will have guest posts here on the blog, from interested friends and compatriots who like to drink, and like to read the news. In this case, the following two drinks come from someone who is much better at following current events and politics than I, whether they’re current or, well, 200+ years ago. I submit for your approval, the Hamilton and the Burr. Apart from my own tasting notes at the end, this is from the great Manny Antunes, who has just graduated from law school! Congratulations!

The Hamilton and The Burr

Greetings from New York City! the Boozy Newsie and Partner in Crime, old friends of mine from college, are taking a break and have graciously let me fill in for them. I’ve been following this blog since it started, so I got really excited when the PiC sent me a message, asking me to contribute a post. However, I am breaking away with tradition for this post, as I will be offering two completely new cocktails (but with a historical twist).

If there are two things New York does well, it’s cocktails and founding fathers. The Manhattan, the Martini, the Cosmopolitan, Alexander Hamilton, and Aaron Burr have all called New York City home. That is why the cocktail revolution of the last ten years and Hamilton, the musical, have taken this city and, frankly, the world by storm. I’ve pretty much memorized the entire cast album on my own and hit up all the major cocktail bars here. The musical, however, is misnamed. It should really be called “Hamilton and Burr,” since the latter is a huge character in his own right and the story of the musical is very much his story as well as Hamilton’s. In honor of these two titans of American history, I have created two new cocktails that reflect their own personal histories and complexities. These cocktail tributes will never adequately embrace all the nuances of these two revolutionaries, but I will still toast to both of them with these drinks.

Note: In the ingredients list, I will be naming the spirits and other ingredients by brand. While I picked these particular brands for their flavor profiles, it is perfectly fine to substitute them with your own close approximations using what you have on hand. I have a bar in my apartment with 50–60 spirits at any given time, which is definitely not something I would suggest for everyone. One of the best skills to develop as a mixologist is to adapt recipes on the fly! 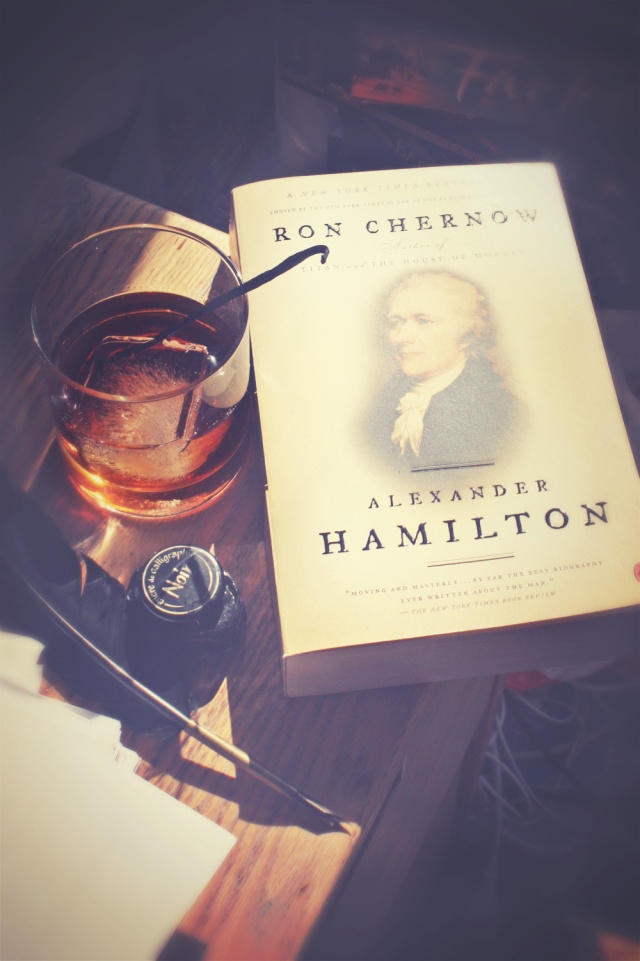 Stir the spirits, the bitters, and the sugar with ice. Strain. Serve over ice in a rocks glass and garnished with the vanilla quill.

This cocktail plays on the recipe for an Old Fashioned but with a mixed spirit and orange-cream twist. Hamilton was a native of St. Kitts and Nevis, and I used one of the last standing Kittian distillers. St. Kitts had a vibrant rum industry, but all we have left is one. The Demerara sugar also reflects this heritage. Because this rum is very vanilla forward, I decided to go with orange bitters as an allied flavor. You don’t have too many orange-cream flavored cocktails, and Fee’s West Indian Bitters have the most orange-y taste of any of the bitters out there. However, to make this a true Hamilton cocktail, I had to include a New York-based spirit, the place where he spent most of his life and whose industry he was vital in starting. Hamilton invested New York’s nascent alcohol industry, while at the same time being in charge of taxing it as Secretary of the Treasury. I chose a New York-based rye, which will add a nice peppery undertone to all the flavor. Last, but not least, the garnish reflects Hamilton’s capacious writing ability. The man wrote over ten thousand pages in his short life!

BN/PiC Notes: This was a really nice modification of an old fashioned, and the vanilla and orange went together nicely. It wasn’t quite like a creamsicle (though that would be good, too!), as it was still stately and not to0 sweet. Then again, that could have been the non-syrup demerara I used. So who knows. The PiC didn’t really like it, but could see how someone would (she’s not a fan of old fashioneds). 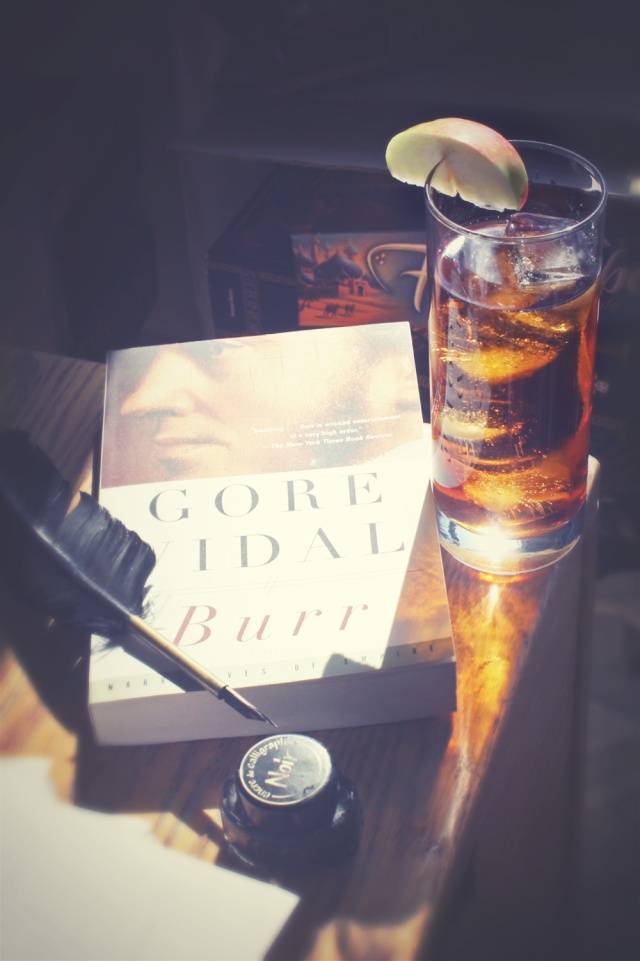 Stir spirits, sugar, and bitters with ice. Strain. Serve over ice in a Collins glass with an apple garnish. Top with seltzer water.

This vegetal cocktail, hopefully, reflects Burr’s personality. It’s refined; it’s complex; it’s earthy; it’s unapologetically different. Burr is not only a native of New Jersey; he was also born in Newark (my hometown!). That is why I went with Laird’s Applejack. It’s from New Jersey and is the oldest continually produced spirit in the United States. Laird’s presses fine New Jersey apples and then distills the fermented juice into the whiskey-like spirit that goes great in fall drinks like the Jack Rose (which I highly recommend). However, I decided to go with more of a garden bent to reflect the oncoming spring and summer. Cynar is a bitter Italian aperitif that uses a ton of herbs and flavoring agents, most notably artichoke. On top of that, a dash of celery bitters will make this a nice garden cooler to drink. There’s a deep irony to this drink, though. Laird’s, to this day, holds the first issued distiller’s license in the United States. Who issued that license? The Secretary of the Treasury in 1789. That was Alexander Hamilton. I guess even in his cocktail Burr can’t escape Hamilton…

BN/PiC Notes: I liked this one a lot! It was, I daresay, my favorite between the two. We actually put a little too much seltzer in so the final product was a little watered down but I had a taste before and it was really nice. Had a sort of caramel apple vibe, and the Cynar, which I usually don’t love, was very tempered by the other ingredients and yet still managed to flesh out the flavor. The nose of the freshly cut apple was a great addition as well. Yum!

One thought on “The Hamilton and The Burr”