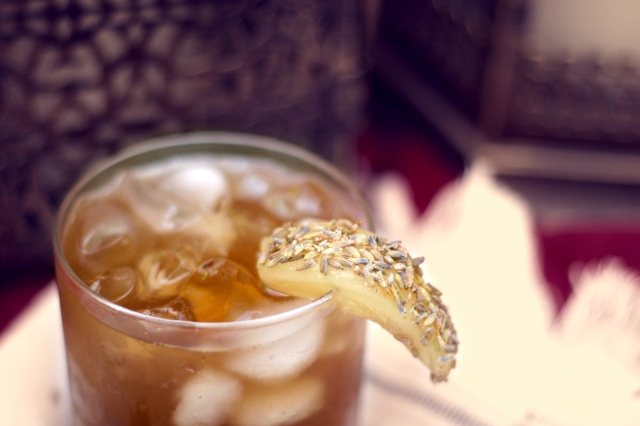 Some of the first drinks I made as mixology experiments were for a Game of Thrones watching party. Some were better than others, but since the new season is about to start, I thought I should go back to my roots, so to speak.

To that end, I thought about what I would make for today, and I decided to go down the track of not necessarily something related to the show itself (White Walker Russians being the old standby) but rather making a cocktail that, if they had the ingredients, the characters in the show would actually drink.

Everyone loves the Daenerys storyline, and when I thought about where she was, the following came to mind. There are slavers, there are ships, so dark rum seems piratey and appropriate, but it’s also sort of Middle Eastern, so maybe some weirder spices — lavender, and what I wanted to be asian pear but they didn’t have it at the store, so just pear.

And this is what came out! Enjoy. Both the drink, and the premiere tonight!

Muddle the lavender and the vermouth in the bottom of a mixing glass. Let it sit for a little bit to infuse. Pour in the other ingredients, stir, and double strain the full mixture into a rocks glass over ice. To make the garnish, I rolled the pear slice in the lavender to get it coated, which looked cool but made it kind of gross to drink as it fell apart into the drink. Maybe just use a sprig of lavender and a pear, separately.

BN: I liked this a lot. What could have been too sweet was nicely tempered by the vermouth, adding a great smoothness and a little more flavor to the drink. It’s rare to have a dark rum drink that isn’t super sweet and this did the trick nicely. The lavender and pear went very well together (somewhat surprising to me, to be honest) and as the ice melted a bit different flavors came out and it melded even more. A good sipping drink, and a fitting drink for the Queen of Dragons.

PiC: I like this! You can actually taste the lavender – it’s very nice. It’s also really smooth, like it has almost a creamy feel when you drink it. And not too sweet. Very good!