Recently we made a visit to Otium in downtown LA, a chic contemporary restaurant in downtown LA. The food will be discussed on the Partner In Crime’s blog, but the drinks, of course, are here.

This was my first choice when we sat down. I’d had a great milk punch in New Orleans, and wanted to repeat the experience. So, I was rather surprised when this cocktail arrived, and looked nothing like I would expect. It was still very good, a much smoother and sweeter old-fashioned, essentially. The chai on top of the ice cube added nicely to the aroma of the drink, and to the taste as well after I mixed it in. I asked about the name afterwards, and it turns out the alcohol was “milk-washed” which means they mix it with milk, and then remove the milk while keeping the lactose in the drink. Somehow. I don’t really understand it but apparently that leads to the smoothness. Very tasty!

The Bartender’s Choice is always a nice touch for a bar, where you say some things that you like and they make you something. The PiC went for this initially, and got something that was certainly light, refreshing, and had the great smokiness that comes with a lot of Mezcal. It definitely had grapefruit in it, something like a Paloma, but we couldn’t figure out the rest. Nevertheless, a very good (bartender’s) choice. We actually thought it was their tequila drink but with mezcal instead but then we got that and it wasn’t. 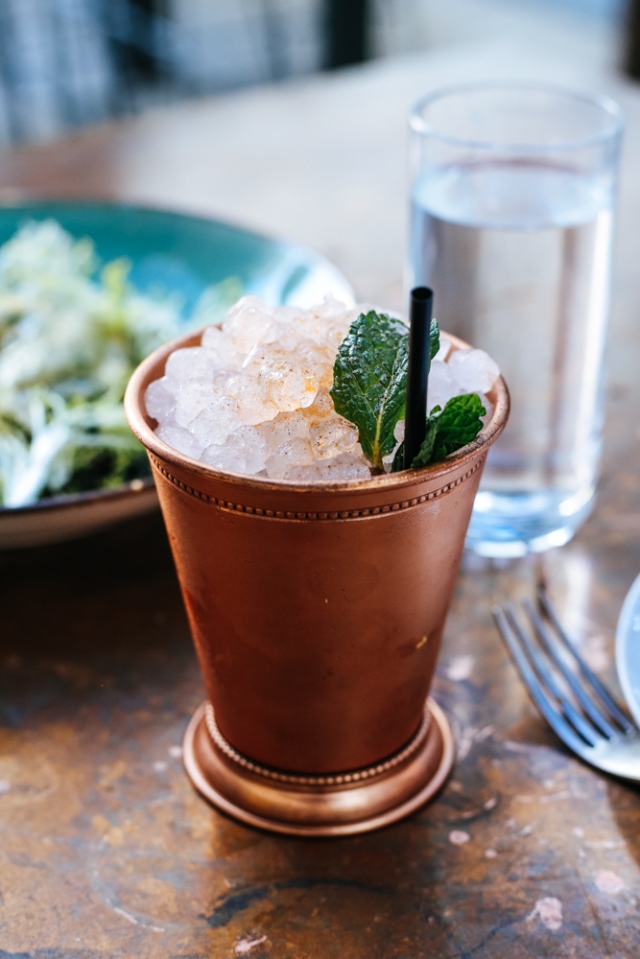 Another nice spirit-forward drink. Pretty much a julep, but with a mixed up flavor. The spirits meshed well together, and I got some gingerbread notes but not really any mint, other than the garnish. I like the presentation, though!

This one was the PiC’s second pick. Very tasty as well, with the chamomile on the ice cube lending an additional piece to the nose. They seem to like that trick a lot here, and I’m okay with it. The saffron didn’t really add much, though. Overall, it was much fruitier than the bartender’s choice but still a good mix. Spicy drinks are always fun too.

Otium is definitely worth a look. Good drinks, great food, and a nice outdoor seating area. Also, it’s near all the theaters, the Broad museum, and a lot of various interesting places downtown.