Another variation on the Old Fashioned theme, this one a little more out there than the others. Why? Well, it’s exactly the same but with champagne instead of a hard liquor. So it adds bubbles and sweetness, among other things. A very different experience.

Apparently this year’s Champagne harvest was very bad, so we could see increased prices and limited supply in the coming years! Horror of horrors! Luckily, the wineries tend to have a big reserve, so it shouldn’t hopefully have a gigantic impact. But we’ll see…

(One bottle of wine to every six large glasses.) 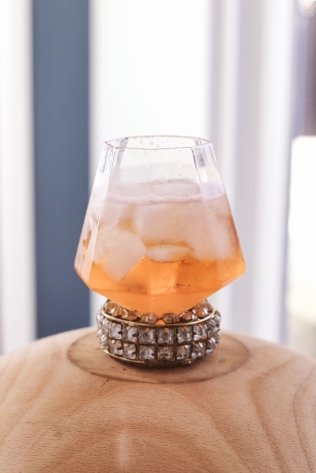 BN: This was really nice. It was surprisingly fruity, and I think that was coming from the bitters. I actually forgot the lemon garnish, even after taking a picture of the lemon, so I’m not sure how that would have affected things. But it really was a vehicle for the bitters. The sweetness and fizz of the champagne just buoyed up the Angostura, and it was a wonderful drink. Since it was so bitters-forward, I’m excited to try it with different kinds — first on the list is Peychaud’s, though I worry the anise notes in that could get cloying with the sweetness. Time to experiment!

PiC: I liked this a lot! You could easily make it for a party, and it’s something new that people haven’t had before.