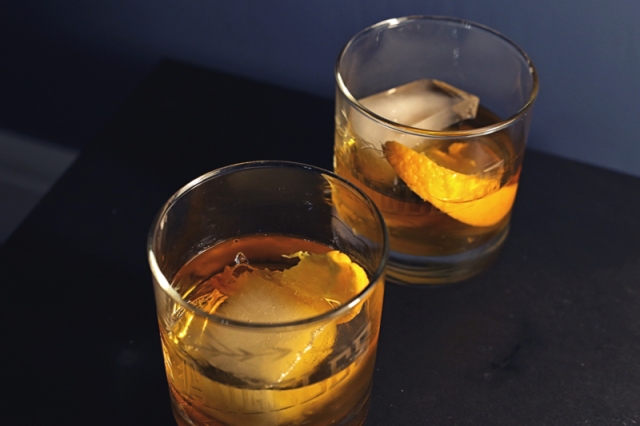 The service sends you, each month, everything you need to make two servings each of two different cocktails. In September, it was the Vermont Old Fashioned and the Ginger Piña (which I’ll discuss tomorrow).

The box arrives packed full of an insane amount of padding, and various small-serving containers of whatever you’ll need, including the alcohol (there’s another service I’m intrigued by, Shaker and Spoon, that gives you the mixers/etc. but not the spirits).

The Vermont Old Fashioned was a pretty simple drink, basically an Old Fashioned with maple syrup (yum!) instead of simple syrup. I actually received extra maple syrup accidentally; they had packed two bottles of that and only one of the rye to mix in — it was supposed to be the other way around. Thankfully, their customer service was lightning quick and immediately sent me out another bottle of the rye.

On to the drink!

In an old-fashioned glass, combine 3 dashes (1 dash = 10 drops) [Never knew that!] of Scrappy’s Orange bitters and 0.25 oz maple syrup. Use a bar spoon to combine. Rotate the glass so that the syrup and bitters mixture give the glass a lining. Add ice cubes – one large ice cube is preferable. Pour in 1 mini bottle [1.5 oz] of the rye. Garnish with an orange slice. Repeat for the second drink. Enjoy!

BN: Make sure to stir this because otherwise you’ll just get pure rye, which isn’t necessarily a bad thing, but doesn’t really say much for the cocktail. Stirring gives out a lot more of the sweetness and orange, though not a huge amount of maple flavor. To me, this doesn’t seem significantly different from a regular Old Fashioned, but it’s tasty. It’s actually a very good vehicle for the rye, though, and I’m very fond of this Whistlepig stuff (first time I’ve had it).

PiC: Still really whiskey. But I can taste the maple!

SaloonBox is a really fun idea. And, at $37.50 a box, it’s about $10 a cocktail — around restaurant prices, rather than home bar prices.Utility-wise, it’s fun to try out random cocktails, and from what I’ve seen they have pretty varied flavors across the months. It’s also nice to be able to try new spirits / liquors / etc. without buying a whole bottle first.

However, is it something I’m going to subscribe to? Probably not, and it comes down to the money. It’s cheaper than drinking out, but since I don’t do that super often, it’s sort of added expense for me. But if you don’t have a strong home bar, and you go out fairly often, then this might be for you! And, of course, if I win another sweepstakes, I’ll be very excited to get my next shipment.