Welcome to 2017! Continuing the eggnog trend, we’ve got a super weird but very tasty combo of red wine and eggs. It also involves clove essential oil, which I had to buy at Whole Foods. It was kind of pricey, but it did make this a very nice quaff. I imagine it was served on wintry train rides? Or something?

This year, I’m going to try to get back into the news game. I’ve been doing the stories, of course, but I’ve been sort of slacking in terms of reporting actual news. Not that the Boozy Newsie is ever going to be known for its hard-hitting investigative journalism, but stories just about people drinking alcohol are kind of lame. So, instead, here’s this rather depressing story… A train (or locomotive) crashed into a platform two days ago in Brooklyn, injuring 100 but luckily there was nothing worse than a broken leg. Which is still bad, but considering the alternatives, not terrible. They’re investigating the crash, including a drug test for the engineer, though I don’t think it’s actually the big news that this story is implying; more likely it is just routine. But we’ll find out! Hopefully this will push the system to add more safeguards and so on to our public transportation. 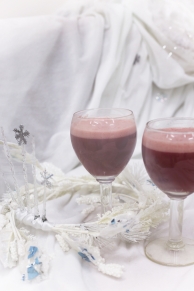 BN: Okay, so two-buck Chuck is probably not “high Burgundy,” but I figured for something like this it should do the trick. This actually tasted much more like a mulled wine than his mulled wine recipe does (that one’s coming soon). It’s a nice, sweetish wine, and a very good winter warmer. The clove adds a nice balance and a hint of flavor – you might want to add even a little bit more than I did, about 5-6 drops. I definitely would love this on a long winter night, and the eggs didn’t even cook! Very much.

PiC: I like it. It’s good and warming, and I like the clove – it feels very seasonal.